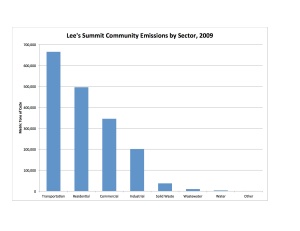 Lee’s Summit is a suburban community near Kansas City. They published their Greenhouse Gas inventory in 2012, using the baseline year of 2009. The inventory studies emissions for the community as a whole, and for the operations of the municipal government. The latter are a subset of the former, but many municipalities study them separately because they have direct control over them, where they can only hope to influence community emissions through policy, and because they wish to demonstrate leadership in abating and ameliorating climate change. 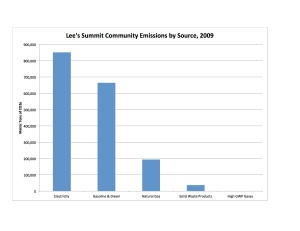 The largest source of emissions was electricity, followed by gasoline and diesel. Lee’s Summit estimated the escape of high GWP gases from municipal operations (refrigerants, fire suppressants), and they were less than 1/10 of 1% of community emissions.

The report does not separate energy consumption in buildings from energy consumption by streetlights, and it does not appear to have included employee commute in the government emissions total. Thus, results are limited in their comparability to other municipal GHG inventories. However, 84.2% of government emissions came from the consumption of energy, and it seems likely that buildings and facilities accounted for more of that total than did streetlights.