Home » Climate Change » Above Average Precipitation in 2017 for Contiguous USA

Above Average Precipitation in 2017 for Contiguous USA

2017 was the 19th wettest year on record across the contiguous USA. 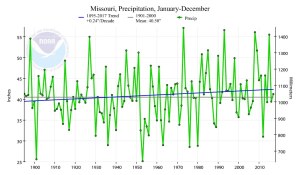 In Missouri, 2017 was the 51st wettest year on record, with 41.22 inches of precipitation. (Figure 2) This puts the year slightly above the long-term average. As expected, the variation from year-to-year is much larger than the change in precipitation over time, but since 1895 Missouri has trended towards about 0.24 inches more precipitation per decade.

The interesting thing about Missouri’s precipitation is that in each of the last 2 years, concentrated storm systems have moved across the state from southwest to northeast, roughly following the route of I-44. They have led to huge amounts of rain over periods of a couple of days, resulting in damaging flooding. (See here and here.) This pattern is the one predicted by climate change models – slightly increased precipitation occurring in heavy precipitation events, with longer, drier spells between. (Drier because increased temperatures will cause the soil to dry out more quickly.) 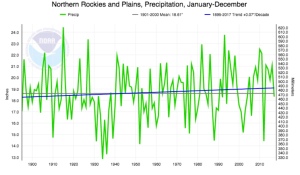 The Northern Rockies and Plains are where most of the water that flows into the Missouri River originates, and the Missouri River provides water to more Missourians than any other source. This region saw 21.17 inches of precipitation in 2017, some 0.28 inches below average. (Figure 3) As expected, the variation between years is much larger than the change over time, but here, too, precipitation has been increasing, though the change has only been +0.07 inches per decade.

What to watch for in Missouri, then, does not appear to be a decrease in average yearly precipitation, but two other issues. First, demand for water has been increasing. Will it grow to outstrip the supply? Second, climate change is causing precipitation that once fell as snow to fall as rain. This changes the timing of when the Missouri River receives the runoff. Will that affect the ability of the river to supply water to meet the demand for water? So far, these answers are not known. (For a more extended discussion, see here.)

The water situation in California is more serious than it is in the Northern Rockies and Plains, Missouri, or contiguous USA. California has a monsoonal precipitation pattern, and it has regions that receive a great deal of precipitation, while other regions receive little, if any. Consequently, the state relies on snowfall during the winter, which runs off during the spring and early summer, and is collected into reservoirs. This water is then distributed around the state. Thus, the amount of water contained in the snowpack on April 1, which is when it historically started melting in earnest, has been seen to be crucial to California’s water status.

After a severe, multi-year drought, last year was a big water year in California. (Figure 4) They received huge amounts of snow during January and February. For instance, the Mammoth Mountain Ski Area received 408 inches of snow during the 2 months. (Mammoth Mountain 2018) Over the whole year California received 27.63 inches of precipitation. That is the 22nd highest amount in the record, and it is 5.24 inches more than average. 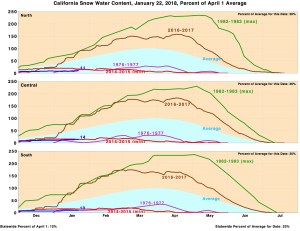 Unfortunately, this winter is not being as kind to California as last year, at least not so far. December, 2017, was the 2nd driest December on record, with only 1989 being dryer. The snowpack measurements suggest that the state has only about 22% of the snowpack that is average for this time of year (Figure 5, data as of 1/22/2018, California Snowpack Survey 2018) This is echoed by data from the Mammoth Mountain Ski Area, which reports only 73 inches of snow to date, vs. 349.5 inches through the end of January last year. (As I write, there are a few days left in January, but it still looks like a very serious shortfall to me.)

The snowpack is also below average in the Colorado River Basin above Lake Powell, the other major source for California’s water. As of 1/28/2018, the snowpack is only 65% of the average for this date. (National Resource Conservation Service, 1/28/2018) Now, snow tends to fall during storms, and there is no predicting when the storms will come. February and March could still bring much-needed snow. But California just got out of a terrible multi-year drought, and it would be very disappointing if it went right back into another after only 1 year.

ADDENDUM: A few days after I wrote this article, the New York Times published one on the water crisis in Cape Town, South Africa. That city is only about 3 months from running completely out of water. This blog focuses on statistics and big pictures. If you want a perspective on what such a crisis might actually look like in an urban area, I recommend the Times article.

By mogreenstats in Climate Change, Weather Patterns on 2018/02/22.
← The Second Warmest Year Ever Three Effects of Climate Change →