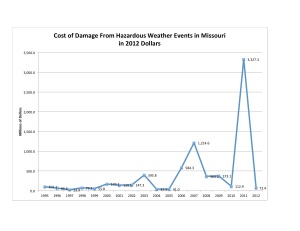 Damage from severe weather has increased in Missouri, just as it has nationally.

The National Oceanographic and Atmospheric Administration maintains records from 1995-2012 regarding the amount of damage and the number of deaths and injuries from hazardous weather. The first graph at right shows that the cost of hazardous weather damage was relatively small through 2005. It shot up starting in 2006, however, with high peaks occurring in 2007 and 2011.

In 2011, damage cost $3.3 billion – more than 25 times the average yearly amount before 2005. The bulk of it resulted from two tornado outbreaks, one of which hit the St. Louis area, including Lambert Field, and the other of which devastated Joplin. That tornado alone killed 158, injured 1,150, and caused damage estimated at $2.8 billion. 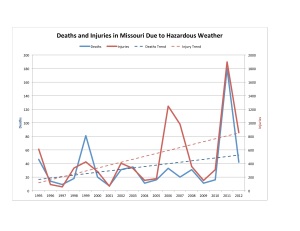 The second chart at right shows deaths and injuries from hazardous weather. Deaths are in blue, and should be read on the left vertical axis. Injuries are in red and should be read on the right vertical axis. The dotted lines show the trends. The large number of injuries and deaths in 2011 are primarily from the Joplin tornado. In 2006 and 2007, injuries spiked but fatalities did not. The injuries mostly represent non-fatal auto accidents from winter ice storms. The fatalities in 1999 resulted from a tornado outbreak.

The Missouri data covers 15 fewer years than the national data discussed in my previous post. It also covers all hazardous weather, in contrast to the national data, which covered billion dollar weather disasters.

Climate change predictions generally forecast an increase in weather extremes. While these two data series conform to that prediction, they are not long enough by themselves to draw conclusions about long-term climatic trends with confidence. Further, the number of deaths and the amount of damage depend on additional factors besides the strength of the severe weather. These include whether it affects developed and populated areas. Thus, for discussions of climate change, the data should be used with caution and in combination with other data.

By mogreenstats in Climate Change, Weather Patterns on 2013/09/26.
← Billion Dollar Weather Disasters in the United States More Homes and Bigger →