Home » Air » The Most Important Pollutants in 2014

The Most Important Pollutants in 2014

In my previous 3 posts, I have noted that in most Missouri counties air quality improved from 2013 to 2014: the percentage of unhealthy air quality days decreased, and the percentage of good air quality days increased. However, the Air Quality Index is a measure that combines the level of pollution from six criterion pollutants: ozone (O3), sulphur dioxide (SO2), nitrous oxide (NO2), carbon monoxide (CO), particulate matter smaller than 2.5 micrometers (PM2.5), and particulate matter between 2.5 and 10 micrometers (PM10). For a brief discussion of these pollutants, see Air Quality Update 2014. 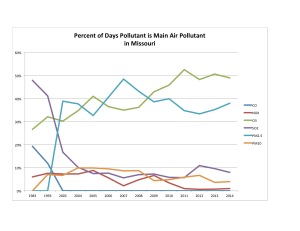 Thirty years ago, ozone was a much less important pollutant than it is now. In 1983, it was the most important pollutant on fewer than 30% of the days statewide. It is now the most important pollutant on about half the time (49% in 2014, 51% in 2013). While we need ozone in the upper atmosphere to shield us from ultraviolet radiation, at ground level it is a strongly corrosive gas that is harmful to plants and animals (including us humans). We don’t emit it directly into the air. Rather, it is created when nitrogen oxides and volatile organic compounds (think vapor from gasoline and other similar liquids) react in the presence of sunlight. These pollutants are emitted into the atmosphere by industrial facilities, electric power plants, and motor vehicles.

The second most important pollutant was PM2.5 (38% of the time in 2014, 35% in 2013). These tiny particles were not recognized as dangerous until relatively recently, though now they are thought to be the most deadly form of air pollution. I can’t find anything that says so specifically, but I believe their zero readings in 1983 and 1993 means that PM2.5 wasn’t being measured in Missouri, not that it wasn’t a significant pollutant back then. The EPA significantly tightened its regulations for PM2.5 a couple of years ago, and the Missouri Department of Natural Resources is in the midst of deploying a program to come into compliance with the new standards. Road vehicles, industrial emissions, power plants, and fires are important sources of PM2.5.

Don’t forget that the chart at right does not show the levels of the six pollutants, it only shows the number of days on which each was the most important. As previous posts have clearly shown, air quality is better. As we have reduced some types of air pollution, apparently, other types have become more important.

I’ll offer some summary conclusions about this air quality data and climb on my soapbox briefly in the next post.

Environmental Protection Agency. Air Quality Index Report. This is a data portal operated by the EPA. Data for 2014, Missouri, and grouped by County downloaded on 11/6/2015 from http://www.epa.gov/airdata/ad_rep_aqi.html.