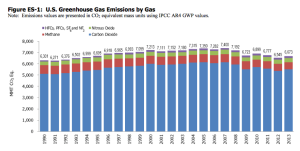 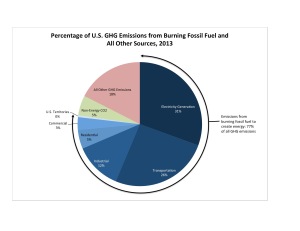 So, what are we humans doing that is using so much energy and causing so much GHG to be emitted? GHG inventories try to answer the question by categorizing emissions into economic sectors. When this is done, it almost always shows that the electric power industry is the largest emitter. Figure 3 at right shows that in the United States in 2013, the electric power industry accounted for almost 1/3 of all emissions.

Electric utilities, however, do not generate electricity for their own use in their power plants, they generate it to distribute to others. If you distribute electricity generation to the sectors where it is used, then industry was the largest producer of GHG emissions, followed closely by transportation. The data are shown in Figure 4 at right. Thus, in 2013 what Americans did most to use energy and create GHG emissions was, first, to make stuff and, second, to drive and fly around.

As noted above, after several years of decreases, in 2013 GHG emissions increased some 2%. This is not good news. The United States has made progress in establishing policies intended to reduce GHG emissions, however, compared to 1990 our emissions are still 6% higher. The best science, as reviewed by the IPCC, suggests that we need to make steep cuts in GHG emissions, or we will wreck the climate of this planet. This is not a policy blog, so I will not get into discussions of possible policy responses. However, it is clear that, if we need to make significant cuts in the amount of GHG we emit, we are not getting there yet.

By mogreenstats in Climate Change, Greenhouse Gas Emissions on 2016/01/21.
← Kansas City Shows Progress 2014 Was the Hottest Year Ever Worldwide →