Kansas City, Columbia, and Creve Coeur have been among the most progressive cities in Missouri when it comes to climate change. Previously, I have reported on updates to the Columbia GHG inventory and the Creve Coeur GHG inventory. This post reports on the Greenhouse Gas Inventory Update 2013 for Kansas City. Kansas City’s original GHG inventory report studied GHG emissions in 2 years: 2000 and 2005. Comparisons between all 3 years are included in the new report.

In 2000, 2005, and 2013, total community emissions were 10.8, 11.4, and 10.5 Million Metric Tons of Carbon Dioxide Equivalent (MTCO2e). Thus, they rose initially, but then declined, with an overall decline since 2000 of 2.7%. The chart at right shows the data by what the report calls fuel source. However, “residential energy” and “commercial energy” are not fuel sources. “Electricity,” “natural gas,” and “gasoline” would be true fuel sources. The categories in the chart appear to represent what have been called “sectors” in other GHG inventory reports. Commercial Energy accounted for 27.6% of total GHG emissions, while Transportation accounted for 25.7%, and Residential Energy accounted for 24.8%.

In the Columbia GHG inventory update, we noted that growing population can invalidate direct comparisons of GHG emissions between years. In the Creve Coeur GHG inventory update, we noted that large changes in the amount of building space under roof can have the same effect. Kansas City provides per capita GHG data, but it does not provide information about any other changes in the city that might affect comparisons. On a per capita basis, Kansas City’s GHG emissions have declined by 8.9% since 2000 (see second chart at right).

The third chart at right presents true fuel source data for 2013. Electricity consumption accounted for 58% of emissions, with combined gasoline and diesel second at 25%. 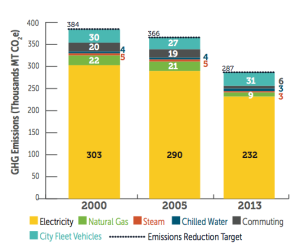 Like Creve Coeur, the Kansas City government has made good progress in reducing GHG emissions from its operations: 25.2%. The Kansas City community has reduced emissions by 8.9% on a per capita basis, but it has a long way to go to meet the target it set: 30% by 2030.