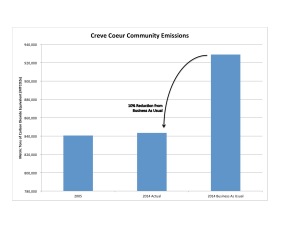 According to the update, Creve Coeur’s total emissions grew by about 0.3% between 2005 and 2014. In 2014, however, Creve Coeur was not the same city as it was in 2005: more than 2 million square feet of commercial space under roof had been added, and the population had also grown. Compared to what emissions would have been had Creve Coeur continued to emit at the same rate as in 2005 (business as usual), however, emissions were reduced about 10%. The first chart at right shows the data. (Note that the chart does not start at zero to better show the change.)

Using the social cost of carbon as estimated by the federal government, Creve Coeur found that by reducing its emissions that much from business as usual, the city had prevented almost $2.8 million in environmental and economic damage in 2014 alone. 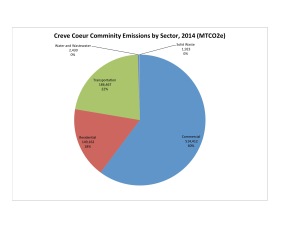 Fully 60% of Creve Coeur’s community emissions came from energy consumed in commercial buildings (second chart at right). Some of this energy represents energy to operate the building, and some of it represents energy used in conducting the activities that occur inside the building (refrigerators in a supermarket, for instance). Together, the built environment (commercial plus residential) account for 78% of emissions.

Emissions resulting from operations of the city government are a subset of total community emissions, but they are studied separately in a GHG inventory for 2 reasons. First, the government controls its own operations directly, while can only attempt to influence community operations through policy. Second, it helps to demonstrate leadership. 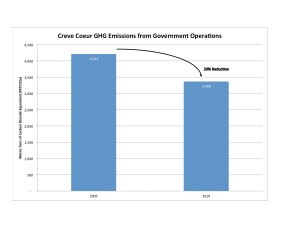 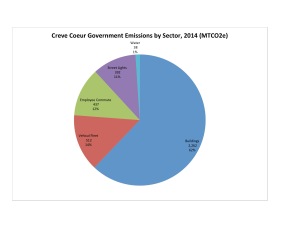 As in 2005, the largest source of GHG emissions were the three large buildings operated by the city: the Dielmann Recreational Complex, the City Government Center, and the Public Works Garage. The fourth chart at right shows the data.

As data from municipalities in the St. Louis region continues to accrue, it becomes ever clearer that our greenhouse gases come primarily from energy consumption, and that dirty electricity is the #1 culprit. We simply must have clean energy from our electric utilities.

By reducing GHG emissions, the Creve Coeur has prevented $2.8 million in environmental damage and has reduced its energy costs by $31,022. Those benefits will accrue to the city every year it continues to abate GHG emissions. Well done Creve Coeur.