In the previous post I looked at average flow on the Missouri River over time at two locations: Kansas City and Hermann. Streamflow at Hermann is larger than at Kansas City, as would be expected. Streamflow at both locations seems to be gradually trending higher, and the variation in streamflow between years is large. 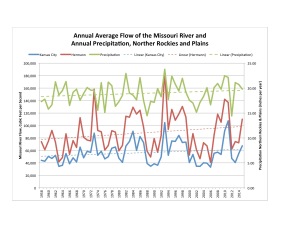 Figure 1 is reproduced from the previous post. It shows average streamflow by year as measured at Kansas City (in blue) and Hermann (in red). These lines should be read against the scale on the left vertical axis. The chart also shows yearly precipitation in the Northern Rockies & Plains, the climate region that approximates the drainage basin of the Upper Missouri River, and it should be read against the axis on the right. I had Excel calculate linear regression trend lines for all three, and they are shown as dashed lines.

One might expect that precipitation in the Missouri River drainage basin is the most important factor impacting river flow. One might also expect that precipitation early in the year (winter and spring snowfall and summer rain) are more important than fall rain, giving the water time to run off into the river. Thus, the precipitation would affect the river most during the year it fell. If these two hypotheses are correct, then one would expect there to be a moderately large correlation between yearly precipitation and annual average water flow. Indeed, if one compares the shape of the green line to the other two, you can see that, though the relationship is not perfect, they do tend to follow each other, especially during later years. For instance, they all have a low valley in 1988, a high peak in 1993 (the year of the Great Flood), a valley in 2002, and a peak in 2010-11.

The statistical technique used to determine if values of one data series are related to those of another is called correlation. Correlation values run from -1.0 to +1.0. A value of 0.0 means there is no relation at all. A value of -1.0 means there is a perfect relation, but it is inverse – one data series has low values when the other has high, and vice-versa. A correlation of +1.0 means there is a perfect relation, and it is direct – when one data series is high, the other one is too, and when one is low, so is the other. The correlation between rainfall in the Northern Rockies & Plains and Missouri River discharge at Kansas City is 0.53. That is a moderate direct correlation, meaning that precipitation plays a major role in determining Missouri River flow at Kansas City, but by no means the only role. 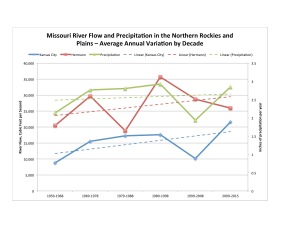 Just looking at the data, it appears that annual variation in the flow of the Missouri River has increased over time. This seems counterintuitive, as one would expect that completion of the dam system, plus increased experience in operating it, would lead to a smoothing of the yearly variation. To check more carefully, I computed a chart showing the average variation between years by decade (Figure 2). As before, the blue line represents Missouri River flow at Kansas City, the red line at Hermann, and these should be read on the left axis. The green line represents annual variation in precipitation in the Northern Rockies & Plains, and should be read on the right axis. As in Figure 1, I had Excel compute trendlines for all three, and they are shown as dashed lines.

Second, at both locations, the size of the annual variation has increased over time. While the individual data points bounce around a bit, the trendlines are very similar.

I conclude that rainfall in the Northern Rockies and Plains is probably the largest and most important factor impacting Missouri River flow, but the effect may not all occur during the year in which the precipitation fell. It may be spread among two or more years. Other factors may impact river flow in any given year.

Increasing variability is also probably a problem for managers of the river. Precipitation is gradually increasing over time, and so is streamflow. Add increased variation to the equation, and you have the potential for increased flooding. At the same time, the fact that the all-time low flow year was 2006 (see previous post) suggests that the trend towards increased flow has not eliminated the potential for problems with low water flow.

One must use caution interpreting this data, particularly since construction of the dams and reservoirs along the Missouri overlapped the start of the data series. I don’t know how dam and reservoir construction impacted this data. With that said, the data seem to suggest a trend toward increased precipitation in the Northern Rockies and Plains, resulting in a trend toward increased annual flow in the Missouri River at both Kansas City and Hermann, and increased variation in the flow from year-to-year.

For river flow: United States Geological Service. National Water Information System: Web Interface. USGS Surface-Water Annual Statistics for Missouri. This is a data portal. Working your way through this data portal is tricky and complex. The sites used above are sites 06893000 (Kansas City) and 06934500 (Hermann). The parameter used was Discharge (sometimes called streamflow) in cubic feet per second. The dates used were 1958-2015. Data was downloaded 6/8/16, and the starting point for the data portal was at http://waterdata.usgs.gov/mo/nwis/annual/?referred_module=sw.